Peter Daly was an Irish Republican and socialist. He was born in Liverpool on 27 September, 1903, into a family steeped in Irish revolutionary traditions. The Daly family returned to Ireland and lived in Tomsollagh [Enniscorthy], Peter attending National School in the old schoolhouse at Tinnacross and later Monageer.

As a youth he was an active member of the local unit of Na Fianna Eireann and was wounded and taken prisoner in the anti-treaty struggle. After 17 months in gaol in 1922, he finally secured his release after an 18-day hunger strike. Like many of the defeated Republicans he was forced to emigrate for work. 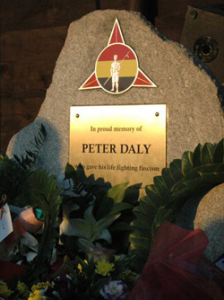 After working in Britain for a period, he joined the British army in which he served for four years, reaching the rank of Sergeant. His service promptly ended when it was discovered he was smuggling guns to the IRA. On his swift return to Ireland he rejoined the IRA and gravitated in 1934 to the Republican Congress. The left wing Congress aimed to bring together all of Ireland’s republicans, workers and small farmers in their common struggle from foreign and native domination.

With the decline of Congress he found himself back in Britain, this time working as a navvy for Wimpy of Hammersmith, London. In 1936, a revolt led by General Franco and army generals, with backing of  Nazi Germany and Fascist Italy attempted to overthrow the democratically elected Republican government of Spain. Peter Daly was one of the first to volunteer to fight with the International Brigade.  Twice wounded he was courageous in battle and was prompted to command the British and Irish battalion. During an offensive at Quinto he was again wounded and although carried from the battle field by his comrades he died in hospital in Benicasim outside Valencia at 6.10 am on the morning of September 5th, 1937.

The 2019 Peter Daly Comemoration will take place on Saturday, 7 September 2019 at 17:00 at the Peter Daly Memorial in Monageer, Co. Wexford. Please see our location map for travel details.