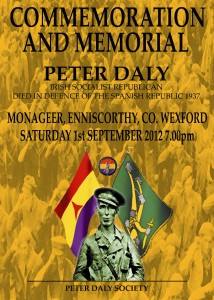 The Peter Daly Society Wexford will hold a commemoration and wreath laying ceremony to the Socialist Republican Peter Daly in Monageer (Enniscorthy) Co. Wexford on Saturday the 1st of September at 7.00 pm.

Peter Daly fought and died with the Irish contingent of the International Brigade in the war against fascism in Spain in September 1937. He had been reared and went to school in Tinnacross and later Monageer. His life was spent in the republican and working class movement in Ireland and England before volunteering to fight for the Spanish Republic.

The guest speaker will be socialist republican Tommy McKearney former hunger striker and now member of the Independent Workers Union. The evening’s entertainment will be provided by popular folk singer Pol MacAdaim from Belfast.