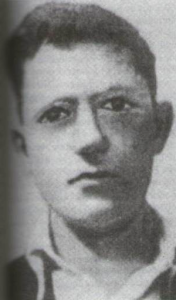 Frank Conroy came from Fair Green, Kildare town and was an IRA activist who fought with the working class against the fascist Blue Shirts in Kildare and Dublin during the hungry 1930s. Like many Republicans he joined the Republican Congress and Communist Party. Conroy volunteered to fight with Republican leader Frank Ryan in the International Brigade to defend the Spanish Republic against Franco.