Captain Jack White, an unsung hero of the Irish Revolution, first published his autobiography “Misfit” in 1930. He was an extraordinary complex man and difficult to fit into any easy slot. He was born into a loyalist and middle-class family, the son of Field Marshal Sir George White, Governor of Gibraltar. He was brought up mixing in the highest circles of the British establishment, hardly an obvious beginning for someone who was to become co-founder of the Irish Citizen Army. White had a colourful and diverse life. After being decorated for his part in the Boer War he resigned his commission, travelled extensively in Bohemia, worked as a lumberjack in Canada and lived in a Tolstoyan Commune in England. 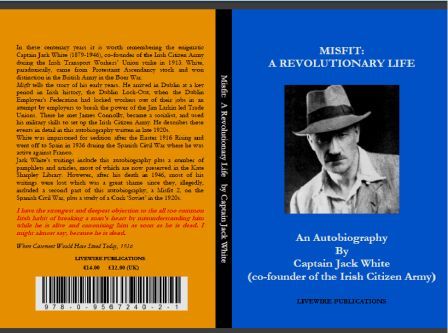 Misfit tells the story of White’s spiritual inner revolution as well as the story of his part in the Irish Revolution. Prior to being instrumental in the founding of the Irish Citizen Army White had involved himself with the opposition to Sir Edmund Carson’s anti-Home Rule Bill and travelled to London to speak alongside George Bernard Shaw on the subjection of Irish Nationalism. He then went on to organise the 1913 protest meeting in Ballymoney, Co Armagh, which was addressed by Sir Roger Casement. The protest proved so effective that he was then invited to Dublin to speak on Home Rule. White arrived in Dublin at the height of the 1913 Lockout. He met with James Connolly and Jim Larkin, and under the influence of Connelly quickly identified himself with the southern workers’ cause.

White was outraged at how the Catholic Church aided and abetted the Dublin employers during the lockout and this outrage was galvanised when they stopped starving Irish children of the strikers going to Liverpool ‘heathen’ homes. It was then that White and Jim Larkin called for volunteers to set up a defence force. Some ten thousand were there, and almost all volunteered. They were directed to the Transport Union Hall. The strike had not actually come to a confrontation however until the infamous Butt Bridge baton charge. White was arrested as one of the leaders of the demonstration and fought all the way to the police station.

After the 1916 Rising White was again arrested and imprisoned for trying to organise a strike of the Welsh miners in support of James Connolly who was imprisoned in Kilmainham Jail under sentence of execution.

Jack White, throughout the 1920s, was active in a host of organisations including The Irish Workers Leagueand The Workers Party of Ireland, moving between Dublin, London and Belfast and now clearly identified himself with left republican politics. A regular public speaker, he also wrote for many publications includingAn Phoblacht.

In 1936, White travelled to Spain to help fight Fascism. Impressed by the social revolution that was unfolding there, he was attracted to the Anarchist cause and wrote the short pamphlets “The Meaning of Anarchy” (1937) and “Anarchism –A Philosophy of Action” (1937. Returning to London in 1937, he worked with ‘Spain and the World’, a pro-anarchist propaganda group. With Matt Kavanagh, the Irish Liverpudlian anarchist he worked on a survey of Irish Labour and Irish aspirations in relation to anarchism and did a study of a little known Cork Soviet. He was also working on a second volume of Misfit, a kind of Misfit 2. The articles and pamphlets which survive are now preserved in the anarchist archive at the Kate Sharpley Library www.katesharpleylibrary.net

After his death, his second wife either alone or in conjunction with the White family, unfortunately destroyed these notes. It may have been through neglect or expediency but it was more than likely driven by White’s criticism of the Catholic Church. Whatever the reason, it was a tragic loss.

White made a final and brief reappearance in public life during the 1945 General Election campaign. Proposing himself as a ‘Republican Socialist’ candidate for the Antrim constituency, he convened a meeting at the local Orange Hall in Broughshane to outline his view. But he never actually got his name on the ballot paper. Six months later Jack White died from cancer in a Belfast nursing home. After a private ceremony, he was buried in the White family plot in the First Presbyterian Church in Broughshane. The only thing written on the tombstone is that he was the son of Field Marshal Sir George White; there is no commemorative record or plaque anywhere.