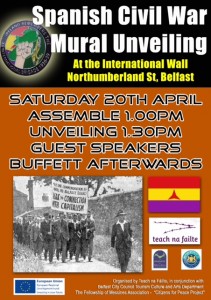 Teach na Fáilte the Republican Socialist Ex-Prisoners Support Group will be unveiling a Mural in Belfast in memory of the Belfast men who fought against Fascism with the XV International Brigade in the Spanish Civil War [1936-1939]. The Mural is situated on the International Wall on Northumberland Street adjacent to the Peace Line.

As this is the 77TH anniversary of the Spanish Civil War, Teach na Fáilte feel that it is important that these men should be remembered as people from both the Nationalist and Unionist tradition bonded together by ideology, united across the sectarian boundaries in a common cause of democracy embodied in working class politics.

The men who volunteered to fight in Spain against Fascism are part of our working class history and no one community has the monopoly on its remembrance so the main objective is to forge a common bond and establish a sense of pride in their endeavours and whose ideology knew no sectarian barriers.

Belfast during that period had its own share of trouble with a background of Outdoor Relief Riots, Unemployment and Depression but these issues became a unifying factor with these Volunteers as they made the decision to go to Spain to fight Fascism. Unbeknown to them at the time, their stand was to be widely recognised and believed to be the opening shots to The Second World War.

This Mural is just another Project that Teach na Fáilte, who along with other Groups, have been involved in around the Spanish Civil War with the erection of marble plaques to volunteers from both sides of the community followed by Memorial Lectures on their lives and ideals. Members of Tnf have also travelled to the Battlefield at Jarama outside Madrid and met with some surviving Brigadistas from other countries.

Teach na Fáilte have had a specially designed badge to commemorate the unveiling of the Mural and will have a buffet laid on afterwards to accommodate all those attending.