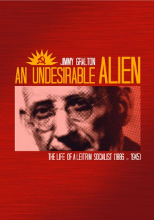 Jimmy Gralton, the great Leitrim Socialist was born at Effernagh, near Gowel, Co Leitrim, on the 17th of April 1886. Like so many Irish people he was forced to emigrate, first to Britain and later to the United States, where he took out US citizenship.

It was in the USA that Gralton first became involved in the labour struggles of the time. Never breaking his links with Ireland he was active in the Connolly Club in New York which also counted among its members Jim Larkin, Nora Connolly and Liam Mellows.

The War of Independence drew him back to Leitrim and he returned home on the 2nd of June 1921, weeks before it ended. The Black and Tans had burned the social hall in Gowel so at once Gralton became active, erecting a large hall on his parents land, which he named the “Pearse-Connolly Hall in honour of the Socialist and Republican leaders of 1916.

The hall became a very popular centre for both social enjoyment and political study. It also became the base for the Direct Action Committee which Gralton had set up to help tenant-farmers regain lands from which they had been evicted. Gralton and his supporters drove cattle on to the property of large estate-owners and settled former tenants on the land. Eventually the frequent cattle drives from the big estates, the Arbitration Courts held in the hall and the land takeovers gave the district the name of the Gowel Soviet.

It was not long before Jim Gralton became the target of the local clergy’s wrath. The more popular the activities in the hall, the greater became the attacks on its founder.
In June 1922 with his authority considerably undermined by constant clerical condemnation, Free State troops came to arrest him. But Gralton escaped and returned to America.
In the US Jimmy Gralton became active in the Communist Party and immersed himself in the work of the American Labour movement, and with a number of other Irishmen he played a leading role in the formation of the powerful Transport Workers’ Union. He also kept in touch with events back home.

In 1932 he returned to Ireland to help his aged parents with the family farm at Effernagh and he quickly picked up the threads of his earlier activity.

Gralton re-opened the Hall and took up the land agitation once again. The local establishment and clergy were furious. Gralton was not easily put off. Stories about him and the clergy have lived on in local folk memory. One is a story about Canon McGraver. Preaching during mass in Kiltubrid, Canon McGraver denounced the hall as a den of iniquity and said he would put horns on Gralton and on anyone who attended it. Some days later Gralton presented himself at the priest’s doorstep “to have his horns fitted”.

Gralton joined the Revolutionary Workers Group and spoke at numerous anti-evection meetings and at meetings of the National Unemployed Movement. He addressed Leitrim County Council on the issue of road workers and along with his cousin Packie Gralton, and other comrades, he organised a series of cultural and political activities in the hall.

However the local political establishment of Cumann na nGael and Fianna Fail colluded with the local gombeen men and the clergy and whipped up another campaign of opposition to Gralton. On one night in November 1932 a dozen shots were fired into the hall. Gralton told the people to throw themselves on the floor, and there were no injuries. The band kept playing. But finally on Christmas Eve 1932 the Hall was burned in an arson attack.

A massive Red Scare now gripped both the country and county Leitrim and in the January 1933 general election the priests openly supported the local Fianna Fail candidate, helping him to secure a seat in the Dail. In return a deportation order was issued by the new Fianna Fail Government ordering Gralton – “an undesirable alien” – to leave Ireland before March 5th.

Gralton went on the run. A local defence Committee was formed by his neighbours and supporters. A national Committee was also formed by such notables as Barney Casey of the Workers Union of Ireland, Seamus McGowan of the Transport Union, Patrick Flanagan of the National Union of Railwaymen, Donal O’Reilly of the plasters Union, Peader O’Donnell, Sean Murray, George Gilmore, Mrs Despard, Frank O’Connor and others. Despite the campaign of the Defence Committee the De Valera government refused to rescind the deportation order.

Gralton, on the run in Leitrim, and in ever worsening health, was thrown on his own resources and on the kindness of neighbours. Except for a couple of days in Dublin he spent all the time he was in hiding in Leitrim sheltered by the local people. In Jul he wrote to Leitrim County Council. The letter was delivered by his mother. To their credit a small number of councillors pleaded on compassionate grounds that the Council call on the Minister for Justice to Gralton a fair trial where he might answer whatever charges were made against him. A deputation of road workers who were in attendance at the meeting seeking concessions in respect of their work shouted “Up Gralton” and called for fair play. However the great majority of councillors were extremely hostile to Gralton with one councillor saying “I suggest we get Hitler over here for a few days”…. (Laughter). Gralton’s plea was ruled out of order.

At a further Council meeting after a debate which centred around whether his father had been attended by a priest before he died, the Council decided to burn any letters received in support of Gralton’s case and a motion to prevent any similar letters being read to the Council was carried unanimously.

On Saturday night, August the 10th 1933, the police eventually caught up with Jim Gralton and he was captured in the home of Frank Beirne of Gorvagh.

He was taken to Ballinamore Barracks and on the following morning he was moved to Cork jail. That afternoon a guard went to the family homestead at Effernagh and told his aged mother that he was under arrest and was to be deported the following day. She asked if she could see him and if he would ever return. The Guard answered “No” to both questions. The old woman was very upset. Distracted by sorrow, she died a number of years later in St. Columba’s Hospital, Sligo, without ever seeing her son again.

Gralton was lodged in Cork jail at 11.p.m. at night and on the following day the Gardai brought him to Cobh where he was put on board a vessel which was leaving for America. Back in Leitrim the priests and local gombeen men set about organising groups to remove the pro-Gralton posters and obliterate the slogans.

Jimmy Gralton was deported in 1933, about the same time as the newly appointed Chancellor of Germany began his persecution of Jews, Socialists, Gypsies and others.
The Leitrim Socialist was never allowed to return again. He spent the remaining days of his life in the American Labour Movement. He was a candidate for the Communist Party in the Borough elections in Manhattan. He again became involved in the Irish Workers Clubs in New York, reprinted Connolly’s pamphlets, raised funds for the International Brigades in Spain and participated in the many campaigns of the period. He died in New York on December 29th 1945 and was buried in Woodlawn cemetery.

In an obituary in the “Irish Advocate” Charlie Byrne concluded “One might disagree with Gralton, but nobody could doubt his sincerity. Let all of us, who believe in the principles for which Gralton stood, pledge ourselves anew to the continuation of the fight for complete political, cultural and economic rights of the working classes in all lands.”

John Mullaly delivering a short talk at Gralton’s grave said “Stone monuments were built in memory of men in the past. This is not the kind of monument Jim Gralton wanted, but a world in which human beings can have security, free from hunger and misery, with sufficient leisure time to study art and music; a world wherein there will be no wars, famine or depression in the midst of plenty.” declan bree