The second annual Peter Daly Commemoration took place on Saturday 1st September, in Monageer co. Wexford. A large crowd of republicans, socialists and trade unionists from across the south east and further afield attended the event. Local residents and political activists came together to pay tribute to Vol. Peter Daly in a united show of strength against fascism. 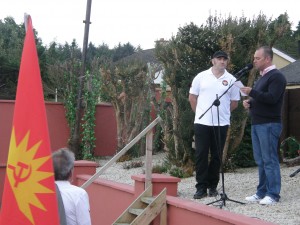 The event, organised by the Peter Daly Society, was chaired by society spokesperson Steven McCann. Steven welcomed all those in attendance, and outlined events of the previous days. In the early hours of Thursday 28th August, a tiny group of neo Nazi’s attacked the Vol. Peter Daly Monument. Describing those behind the attack as cowardly thugs, Steven thanked all those who had work so hard to restore the monument in time for the commemoration. Stephen also thanked the people of Monageer who had offered whatever help was necessary to ensure the monument was repaired.

Wreaths were then laid in honour of Vol. Peter Daly by the various organisations and individuals in attendance… 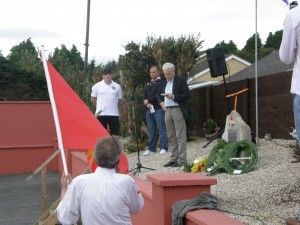 The main speaker at the event was veteran socialist republican and former IRA hunger striker Tommy McKearney. In an inspiring speech, Tommy gave a detailed account of Vol. Peter Daly’s life and outlined why Daly’s political beliefs are just as relevant today. Peter Daly was a dedicated Irish Socialist Republican. At a young age he became active with Na Fianna Éireann and took an active part in the Tan war. As an IRA Volunteer he risked his life defending the republic from counter revolution and was twice wounded in action during the Civil War. Captured by Free Staters, Peter Daly spent 18 days on hunger strike before his release.

As a committed socialist republican, Peter Daly became active with the Republican Congress in 1934. Like many Irish Republicans, Peter saw the rising threat of Fascism in Europe and went to Spain to confront it. Vol. Peter Daly fought bravely in defence of the Spanish Republic and was a leader of the Irish and British Brigades. At an offensive at Quinto, Vol. Peter Daly was again wounded. Although carried from the battle field he later died from his injuries. 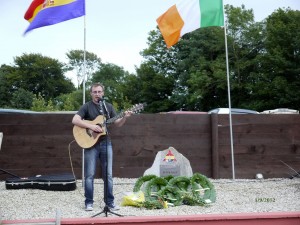 The commemoration was brought to a close by renowned protest singer Pól MacAdaim, who entertained the crowd with a rousing version of Viva la Quinta Brigada.

Speaking after the Commemoration, Steven McCann said, ‘Tonight the republican community has sent a message to those who attacked this monument. The large crowd in attendance is a testament to the fact that socialist republicans will not be deterred by the actions of cowardly thugs. We will continue to commemorate our patriot dead with pride and will work to re popularise their message. Racist boneheads have nothing to offer the working class and are out of touch with Irish society.’

McCann continued, ‘Today’s commemoration has been a great success. The Peter Daly Society would like to thank everyone who attended and all those who have worked so hard to make this event successful. We are already planning next year’s commemorative celebration which will be bigger and better than ever.